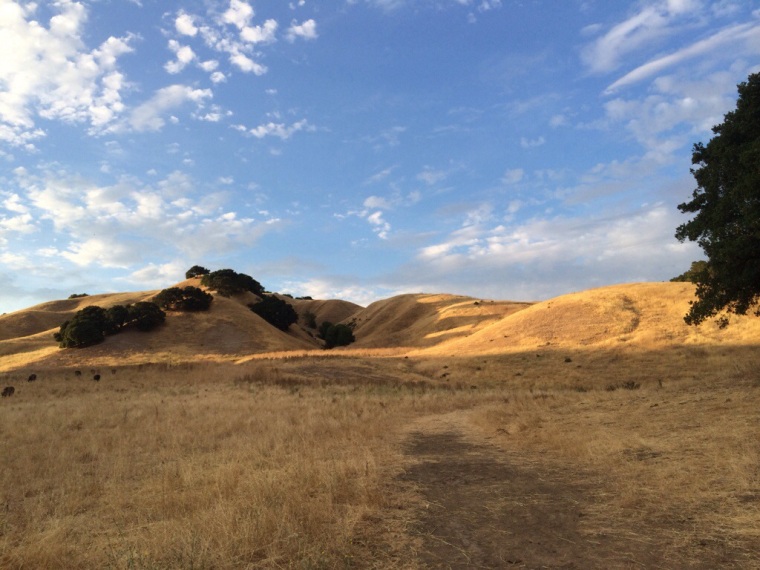 Kieran and I decided to have an evening adventure, or a “crepuscular” one, to put it in scientific terms. “Aren’t bullfrogs crepuscular?” he asked me as we drove the 17 miles to the cattle pond on the west side of Briones. I said I thought they were.

We parked on the gravel shoulder of the road and went through a creaky cattle gate into a broad, golden field beneath a dramatic summer sunset sky. Black dots of cattle showed on the yellow, terraced flanks of the nearby hills. Kieran still has a bit of PTSD from our previous visit to this place, when, as I was packing up all the nets, containers and other impedimenta of our expedition, he wandered between a mother cow and her calf and got head-butted by mama. She knocked him right down but fortunately didn’t trample him. So instead of a trip to the ER he got a bump on the noggin and a great story to tell!

He warily eyed the placidly grazing cattle as we crossed the pasture. “I don’t see any calves,” he said, “so I think we’re safe.”

We plonked down our gear (a bag full of plastic deli containers with snap on lids, a towel, swimsuit, and a few different aquatic nets) beside the pond, much shrunken after this year’s drought. Green cattails still ring the pond, though they’re not as tall as in previous years, and the mud at the rim of the pond bears deep hoof holes where thirsty cattle have come for a drink.

Even as we neared the shore (the pond is about a dozen yards across, with rafts of vivid green duckweed floating on it and tendrils of darker, evergreen colored hornwort poking up from the depths) bullfrogs gave shouts of warning and leapt into the water, some of them skipping across like a flat stone you’d throw. They regarded us from the safe center of the pond with peeping periscope eyes.

Dozens of a different frog hopped away from our feet as we walked the shore, however, and we were able to catch them easily by hand. These were tiny Pacific Treefrogs, Hyla regilla, or Pseudacris regilla if you listen to the lastest from those pesky DNA taxonomists! Each was brown or green, with spots and a dark stripe through their eye, and small enough to crouch on a dime or a nickel. Kieran filled a plastic deli container with water and soon had filled it with about 20 of the little creatures, who swam and clambered up the sides to peer over the rim.

I used a small pet store aquarium net to catch a bunch of freshwater snails and some juvenile backswimmers (Genus Notonecta, I think) for our goldfish bowl “pond” here at home.

The clouds overhead flared red and bright white against the dark blue sky. At last, after Kieran had lost both shoes to mud suction (we extracted them with great difficulty!) and was covered from foot to knee and hand to elbow in green-brown muck, we got ready to head home. After packing everything, we walked up the slope about 20 yards and then sat to look down at the tranquil pond. Dozens of tiny dark shapes flitted about — bats!

I pointed them out to Kieran and he sat on my lap for about 10 minutes to watch them. The little dark creatures flew acrobatically above the pond, where swarms of unseen insects no doubt congregated. “Now we’re just like the Wild Kratts!” Kieran said proudly.

While the world darkened around us, with just the water preserving the last light of the sky like a shard of broken mirror, a grand-daddy bullfrog down in the water began to serenade us with his deep bass call. It sounds — if you’ve ever heard it — like nothing else.

Kieran came home and went straight into a bubble bath!