Today we took a trip to our local swamp, er, “wetland habitat” — a cattle pond on the western edge of Briones Park, by the Bear Creek entrance. We caught a bunch of frogs, including two very large bullfrogs, Rana catesbeiana, which I netted with great difficulty, wading in the muddy, plant-choked pond up to my neck. My son busied himself catching small treefrogs (Hyla regilla) on the banks and in the reeds. Big black cattle came right down to the pool and waded in a ways to drink, churning the shoreline to an oatmeal-like ooze with the power to suck your shoes right off! We went last night to the same pond, and watched the bats frolic in the air while a large owl serenaded us and several bullfrogs croaked out their bass mating song.

The first creature we found was a brand new dragonfly, just emerged from its nymph’s shell, still green and soft and fragile. 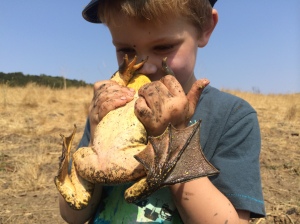 It’s good for kids to get up close and personal with wildlife. 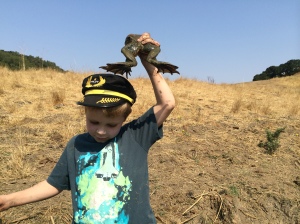 Rana catesbeiana is a heavy frog, too!

Rana catesbeiana ain’t native to California — it was introduced to the Golden State in 1905 for food! Those legs can be as big as a chicken drumstick, but due to the anaerobic function of amphibian muscles, they can still kick hours after they’re cut off, even in a frying pan! Yuck! 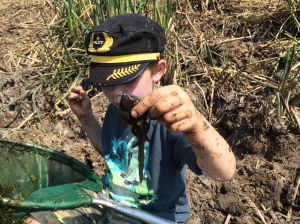 Bullfrogs are huge, and so are their tadpoles!

Getting a good look at one of two large predaceous diving beetles we captured.

Our dog Rooney was also quite curious!

These are the largest diving beetles we’ve ever found.