Kieran and I have often seen a red-eared slider, Trachemys scripta elegans, sunning itself on rocks in the pond in Oakland’s lovely, secluded Japanese Garden. This week Kieran crept up on the basking turtle and caught it!

Although purists may pooh-pooh the red-eared slider, since it’s an introduced exotic that competes with the native Western Pond Turtle (Actinemys marmorata) which we’ve met before in Sunol, as Samuel McGinnis put it, “It is certainly not the Red-eared Slider’s fault that it is now in many California freshwater habitats, apparently successfully competing with this state’s sole native pond turtle. Instead, the blame lies totally on the species that is responsible for its presence here.”

So the slider’s not a villain. 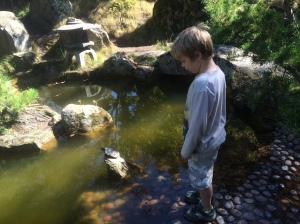 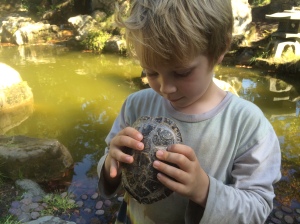 Kieran is also keen on meditating in the Japanese Garden.