My son had his first “snow day” today — school was closed because a storm of biblical strength was set to lash the Bay Area, flooding streets, downing trees and power lines, and generally sowing chaos. Because of all the hype before the storm, I expected something much more dramatic. But still, it was a good, steady soaking and a blustery blow. We stayed in, drank hot chocolate, I read him “Beowulf,” and we watched “The Empire Strikes Back.”

In the afternoon, when the rain combined with a high tide had swollen Lake Merritt and the connecting estuary so they nearly overflowed their banks, we suited up and went out on “flood patrol.”

The lake level was quite high, and rocks we normally scramble around on were submerged. We saw many waterproof birds — they don’t mind the rain — including coots, mallards, goldeneyes, gulls and a greater egret.

Beneath the double roadway bridge over the estuary, two men fished with long, ocean fishing type rods, and several homeless people struggled to start a fire in a pile of damp wood, which mostly smoldered and filled the cavernous underpass with pungent smoke. Later, they got it going properly and flames leapt upward in the crepuscule.

Shockingly, the local playground was deserted. Kieran insisted on testing all the equipment in his “slop suit” rain gear. He found that the slide was extra speedy due to its wetness, and he fairly flew off the end, bouncing and rolling to a stop, laughing, jumping up, and rushing around to repeat the experience. I myself went down the slide a couple times, shooting off so fast it was a great way to practice my ukemi!

In the tidal marsh on both sides of the estuary are fields of cattails and shore grasses, plus a couple of humble little ponds, normally about eight feet in diameter, where Kieran and I have often gone in summer to catch diving beetles and dragonfly nymphs. But after this rain, the ponds have grown and are twenty or thirty yards long. They’re doing the job of a tidal marsh, though — absorbing all that water that would otherwise flood the nearby land.

It’s nice to be back home and dry again.

Suited up and ready for flood patrol! 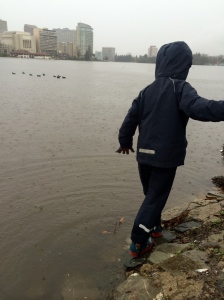 Wading in the lake, which is at a very high flood stage. 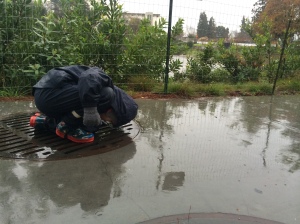 Where does all that water go?

The cone of a giant sequoia, about the size of an egg. 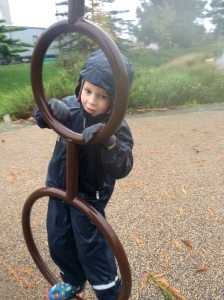 The overflow ponds are doing their job — this one has grown five- or sixfold. 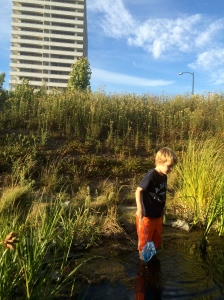 In dry summer months, the ponds are tiny.

Cattails along the overflow pond beside the estuary.