U.S. Navy needs you! (As a proofreader)

Do you know what a sonobuoy is? It’s a listening device dropped into the ocean, usually to help locate enemy submarines. The word sonobuoy comes from sonar and buoy.

So far, so good. Recently my son and I visited the USS Hornet museum in Alameda — it’s an aircraft carrier that served in World War II and the Vietnam War. While strolling among the aircraft displayed on the enormous flight deck, I found that the navy had misspelled sonobuoy on one of its antisubmarine planes! At least they were consistent — it was spelled sonobouy on both sides!

My copyeditor’s curse has struck again! All those years as an editor and I can’t stop finding spelling mistakes everywhere.

Admittedly, English spelling is ridiculous and it’s not surprising that someone spelled it wrong while painting it on the aircraft. 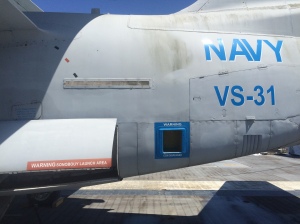 How do you spell sonobuoy?