The last of our many Tenodera sinensis praying mantises is still hanging in there, literally and metaphorically, as he’s suspended from grass stems and leaves in our balcony terrarium, but also because he’s lived well past his “sell by” date! Here we are in December, and he’s still around. Being a semitropical species, T. sinensis don’t flourish well in our Bay Area climate, at least not well enough, so it seems, to create viable wild populations. Every spring, the species is reintroduced by people putting egg masses in their gardens, hoping the mantises that hatch will eat up pest insects (though, as we’ve seen, they will eat any insects they catch, including helpful pollinators like bees!). This species clearly has the potential to colonize Northern California, but it hasn’t quite done so yet, though this long-lasting male’s survival shows it could someday happen. Our other local species, Mantis religiosa, native to Europe, has successfully become a wild resident here in the Bay Area — there are healthy wild populations in Redwood Park in the Oakland Hills, as well as in Briones Regional Park, on Mt. Diablo, and in Sunol south of Pleasanton.

Here are some photographs of our last Chinese mantid of the season. Note he has three “ocelli,” or simple eyes on top of his head, in the center. These eyes don’t give the kind of clear, binocular vision afforded by his enormous compound eyes, but they are light sensitive and may help him detect overhead movement, such as a predatory bird.

The tarsal claws at the tips of all his legs, even his raptorial forelegs, allow him to cling to almost anything, including a very slender stem or the edge of a leaf.

The closest relatives of mantids are — wait for it! — termites and, yes, cockroaches. You can see the similarity with roaches in the patterns of wing veins. All three groups of insects fall in the Blattarida (at least according to some experts), a taxonomic subtercohort that takes its name from Blattaria, or cockroaches. Other taxonomists put mantids and roaches and such in the superorder Dictyopterida, from the Greek for “net wings.”

This male Tenodera sinensis can hang upside down, or sideways, using tiny tarsal claws on the ends of his legs. 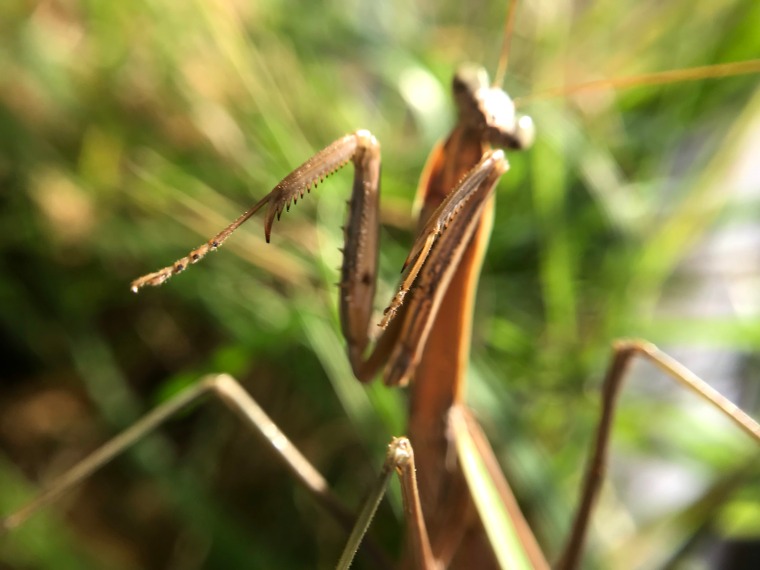 Even the raptorial front legs, armed with sharp spines and spikes for seizing prey, have delicate walking claws at the ends.

The mantis can extend the delicate tarsi of its front legs and use them for climbing or walking.

One of the long, walking legs showing the tarsal claws, which allow the insect to grasp and hang from even a narrow stem. 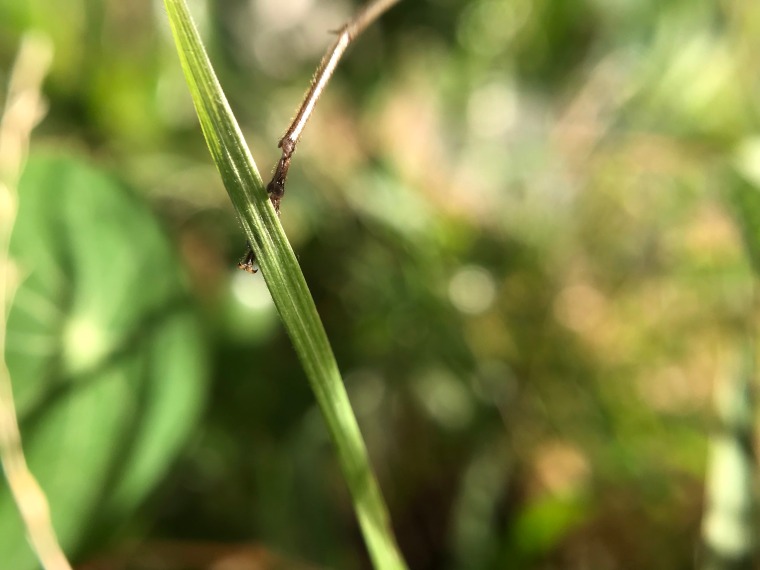 The tarsal claws can also grab a blade of grass or the edge of a leaf. 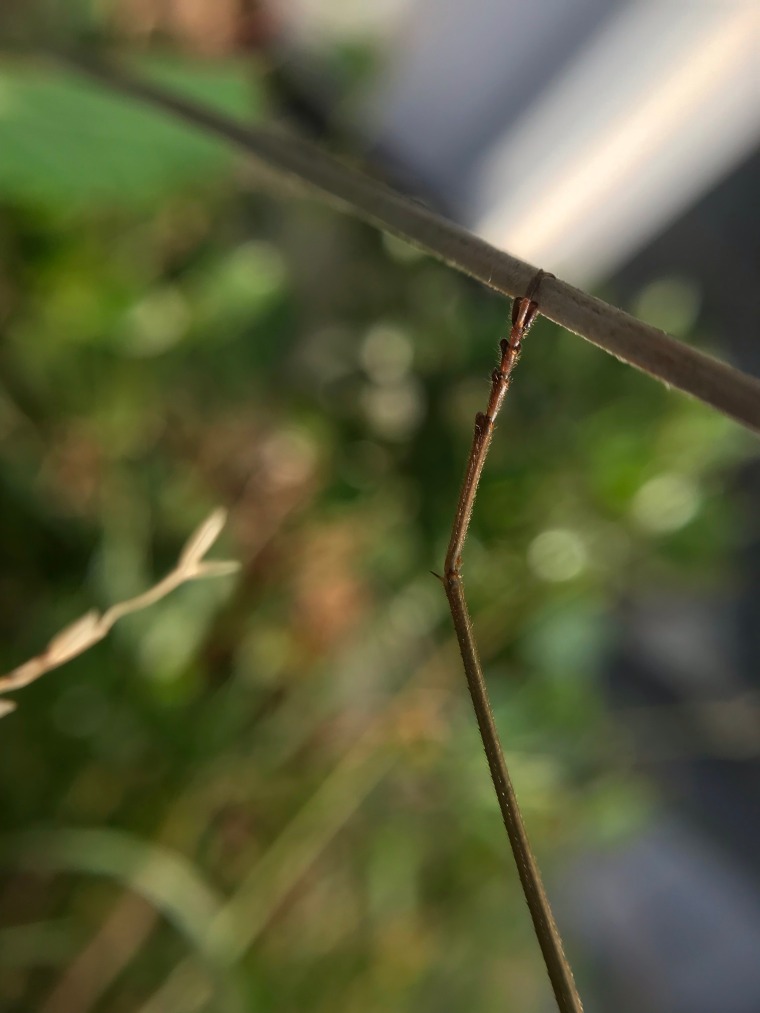 This view shows the flexible tarsal segments of the “ankle” and the claws bent around a stem. 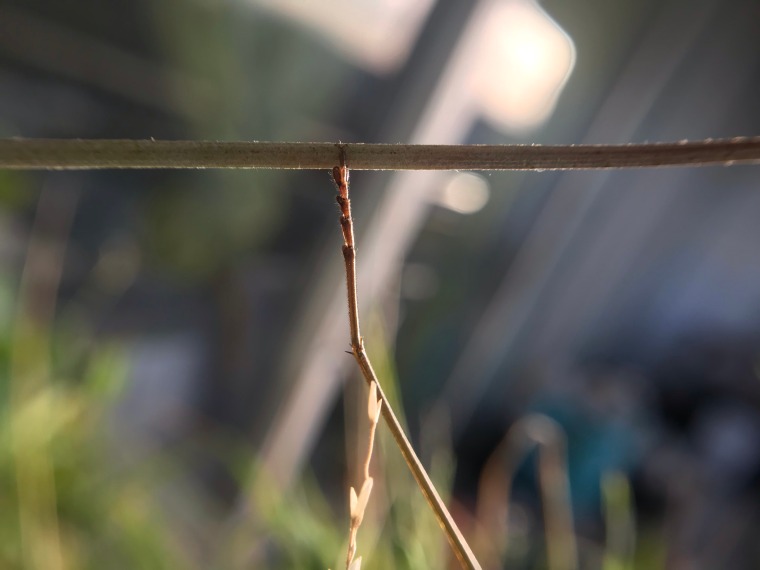 The mantis can hang its entire body weight by one leg.

Between the antennae the three ocelli, or non-compound eyes, are visible. 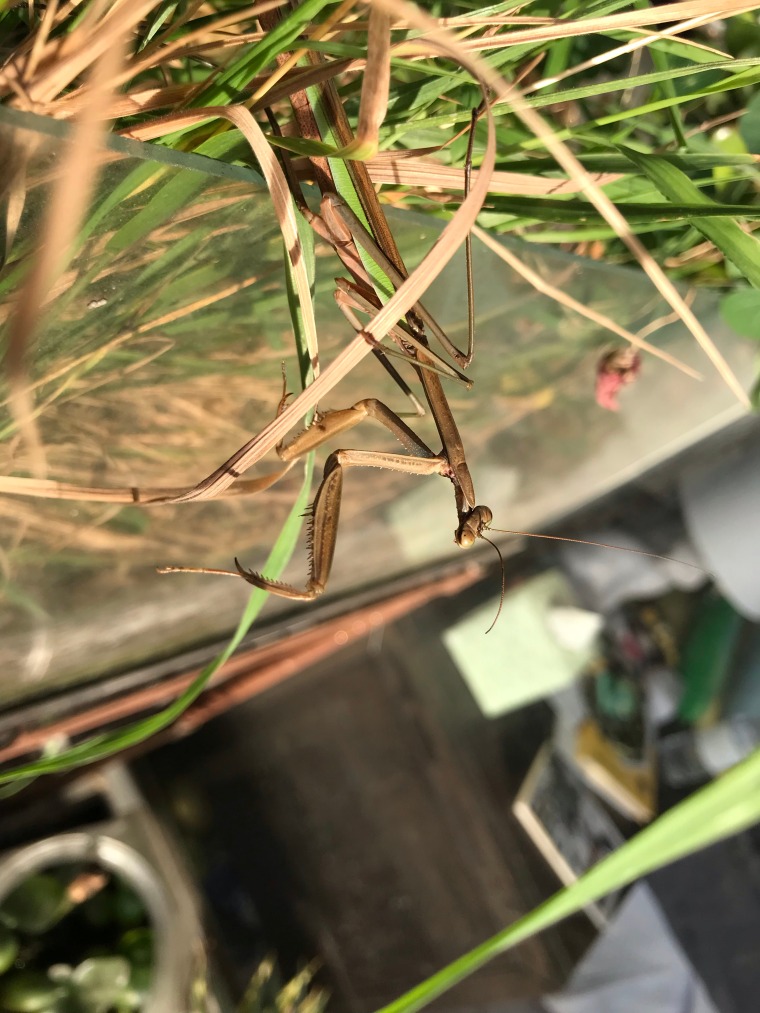 This species, and Mantis religiosa, tends to climb as high as it can on plants, and then hang upside down near the tips of leaves or near flowers. Male mantids, in particular, are more restless than females, who will stay longer in one place. 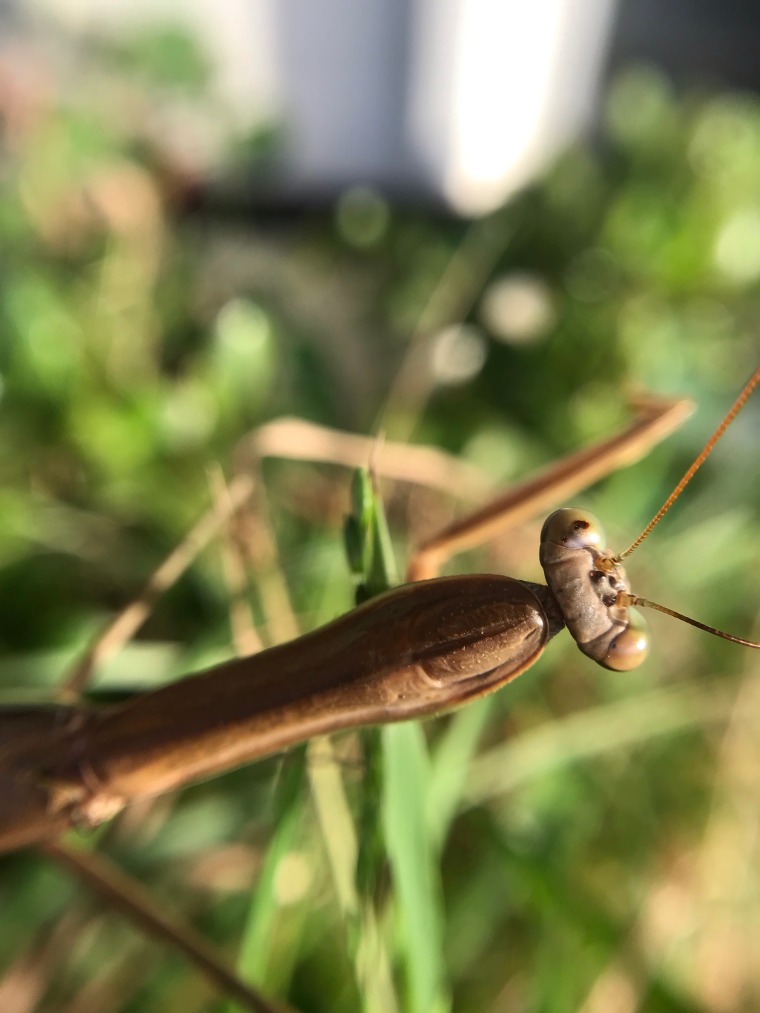 Another view, from above, showing the three simple ocelli arranged in a triangle between the bases of the antennae. These simple eyes can detect light and dark, and possibly the movement of a predator above. 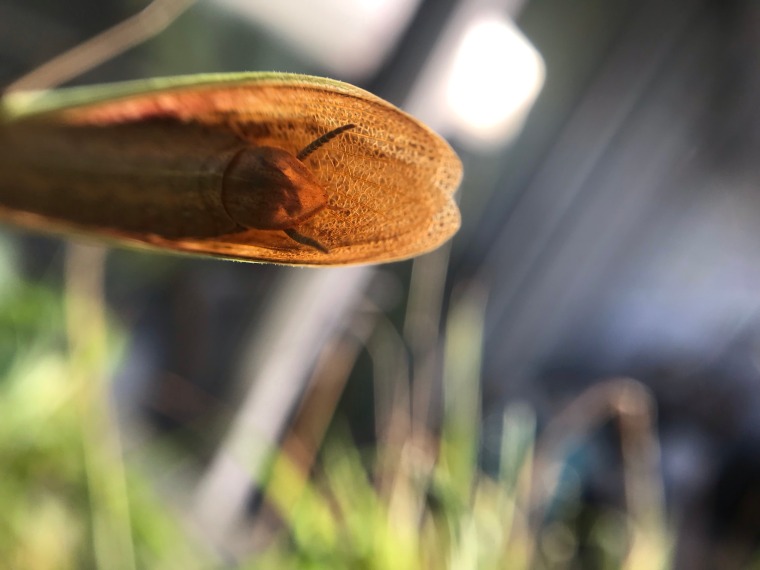 Dictyopterida in Greek means “net wings.” Here the cerci at the end of the insect’s abdomen are visible.

The closest relatives of praying mantises are the cockroaches and termites, also in the Dictyopterida. 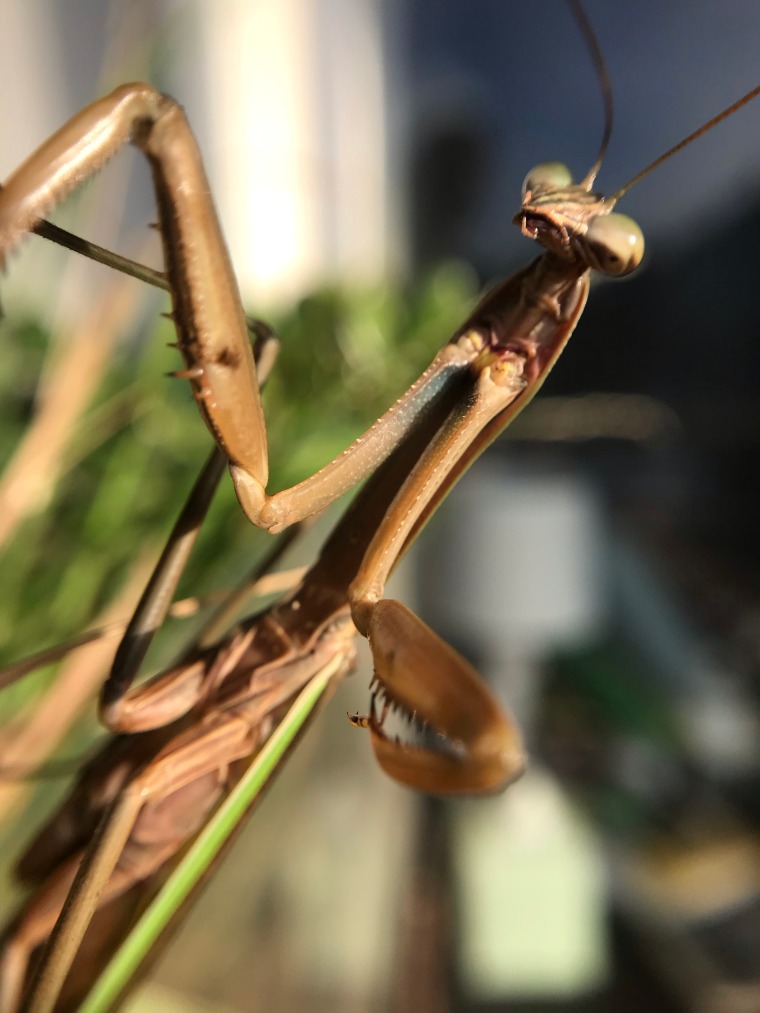 The front legs are particularly well adapted for clutching prey. 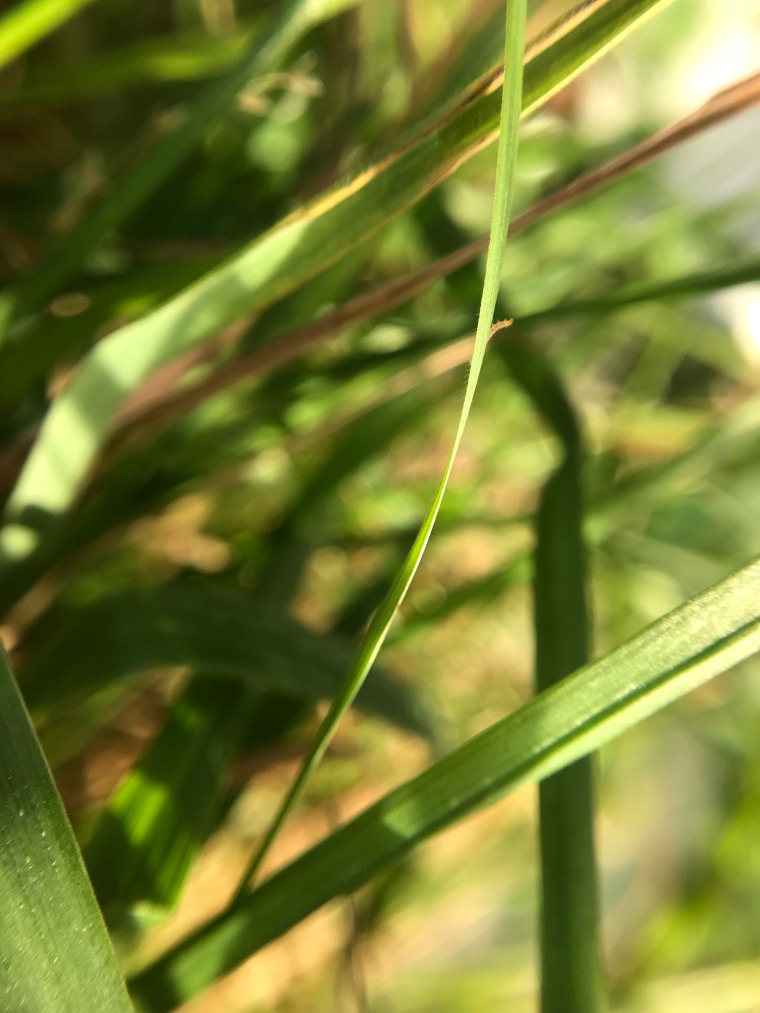 Look closely! A tiny white caterpillar on a blade of grass in the terrarium, too.