My father’s wife, who took care of him, died recently, and I’ve been going through a lot of his things (as well as visiting him with trained therapy insects!), including boxes of his letters and writing implements from his garage. My dad has a Ph.D. in paleobotany from the University of Montana, plus a number of other degrees. When I was in high school, struggling through Calculus, which I thought was tough going, my father was getting another bachelor’s degree, this one in meteorology. He’d sit with me at our dinner table doing his homework as I did mine. The math problems he had were so advanced and so difficult that I no longer felt sorry for myself with my easy integrals.

One thing I found in my dad’s garage was a collection of beautiful wooden pencils, accumulated over his career. He was an excellent scientist, mathematician and draughtsman, and he loved pencils also for their aesthetic qualities. Looking at these amazing pencils, a rainbow of colors, I perceive a now-vanished world of engineers, artists and writers who found them elegant, functional and beautiful. How many of these pencils are still manufactured today? Each is a different hardness, stamped with a code few people today even understand. They’re from many countries. Some are for writing on film, and say so on the sides. Others are from institutions like the Berkeley Public Library, or are curious mementos like the Blackfeet Indian Pencil.

I haven’t even started going through his collection of mechanical pencils yet. 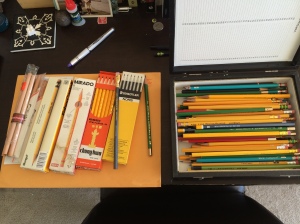 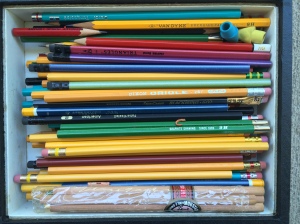 They came from many countries. “Moustache Brand” No. 2 smooth drawing pencils from Briarcliff, N.J. anyone?

He had several boxes of Chinese pencils.

Beside them were others from Germany (made in Malaysia, though) and Tennessee.

Utrecht professional red drawing pencils from Austria in various grades, plus a Kimberly 2H from the U.S.A.’s “General Pencil Co.” and a Castell 9000 H from Germany. 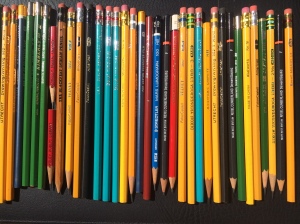 A rainbow of pencils.

Manufacturers used to put a lot of effort into branding their pencils. Does this level of love, effort, elan, still exist? 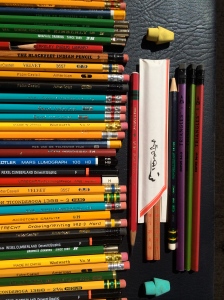 Some pencils were made triangular, so they wouldn’t roll off the table. Japanese pencils look like a package of chopsticks.