Every year I try to make at least one recipe from the wonderful Cooking with a Wallflower blog. Already this summer Kieran and I made cactus lemonade, which we first discovered there, twice.

Last year I made a blackberry peach pie. This summer I decided to try Andrea’s blueberry pie recipe.

I have a great pie crust recipe, handed down from my grandmother, Iuka Taylor, born in Shirley, Arkansas, on Dec. 8, 1922, and passed to me through my mother. Over the years I’ve tinkered with it a bit — I make a lot of pies! — but I haven’t changed it much recently since I don’t think it can get any better. I used unbleached pastry flour from the Food Mill here in Oakland for this crust.

I followed Andrea’s recipe, except that I made it a bit bigger, since I used I giant, 10-inch “fat daddy” pie tin, the largest I have, and four pints of blueberries I bought this morning at Berkeley Bowl.

This afternoon I made the crust, rolled out two rounds, one for the pie tin and the other for the lattice on top of the filling. I like the big “fat daddy” dish for fruit filled pies, as it can hold so much. For custardy pies like sweet potato, it isn’t as good, because it’s so broad and deep the center of the filling doesn’t always congeal. But for fruit pies like this, or strawberry-rhubarb pie, it’s excellent.

I’d never used an egg wash before — I typically use a crust wash of milk mixed with cream — but I tried the egg wash this time to see how evenly the crust would brown. It seems to have worked well. Thanks to my trusty kitchen assistant (a four legged, furry garbage disposal), I had no trouble disposing of the extra egg wash! 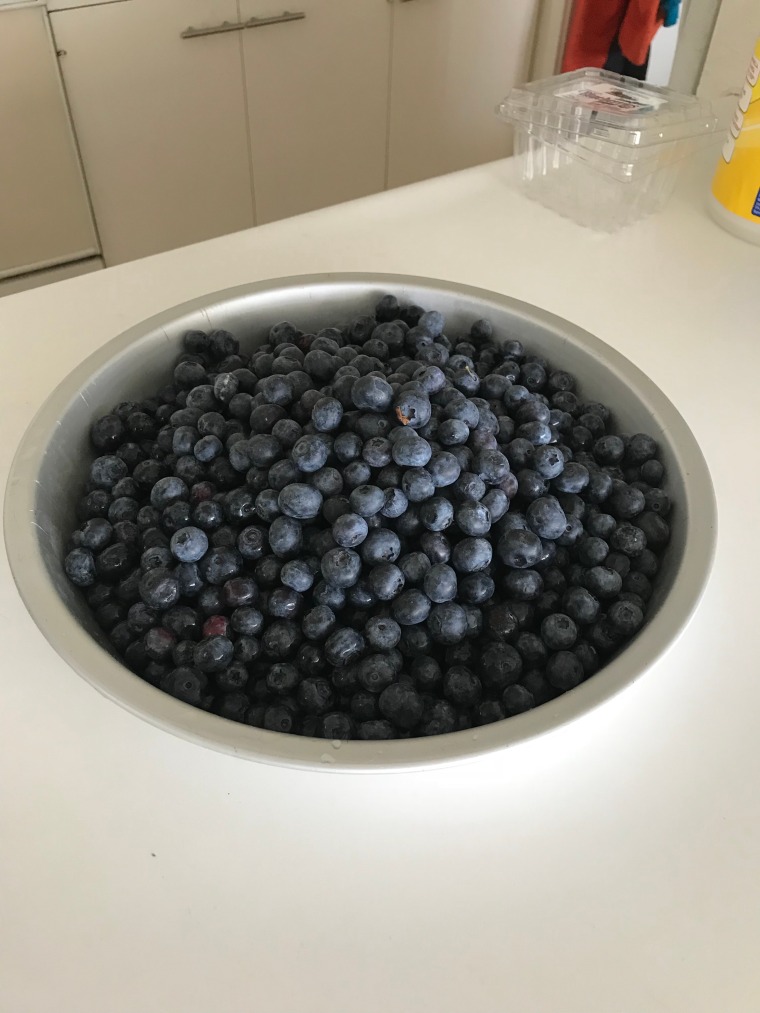 I bought four pints of blueberries at Berkeley Bowl this morning. It took that much to fill the giant, 10-inch pie tin! 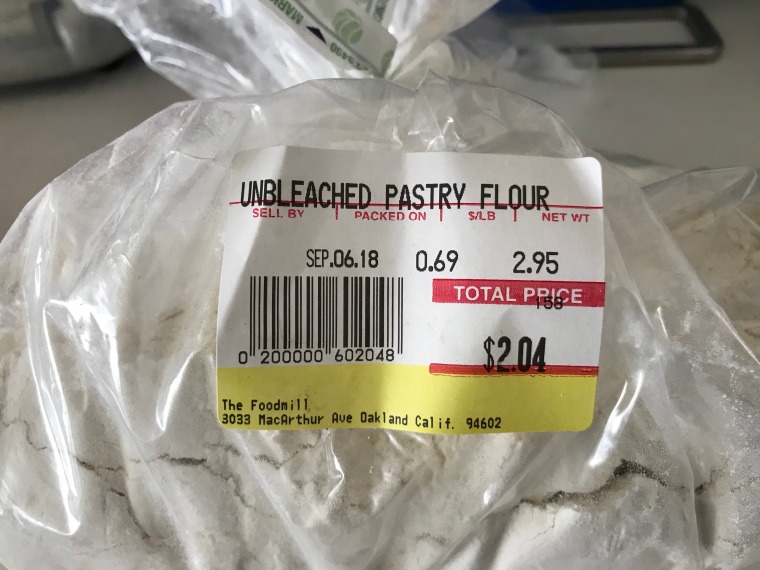 For this crust, I used excellent pastry flour from the Food Mill here in Oakland. 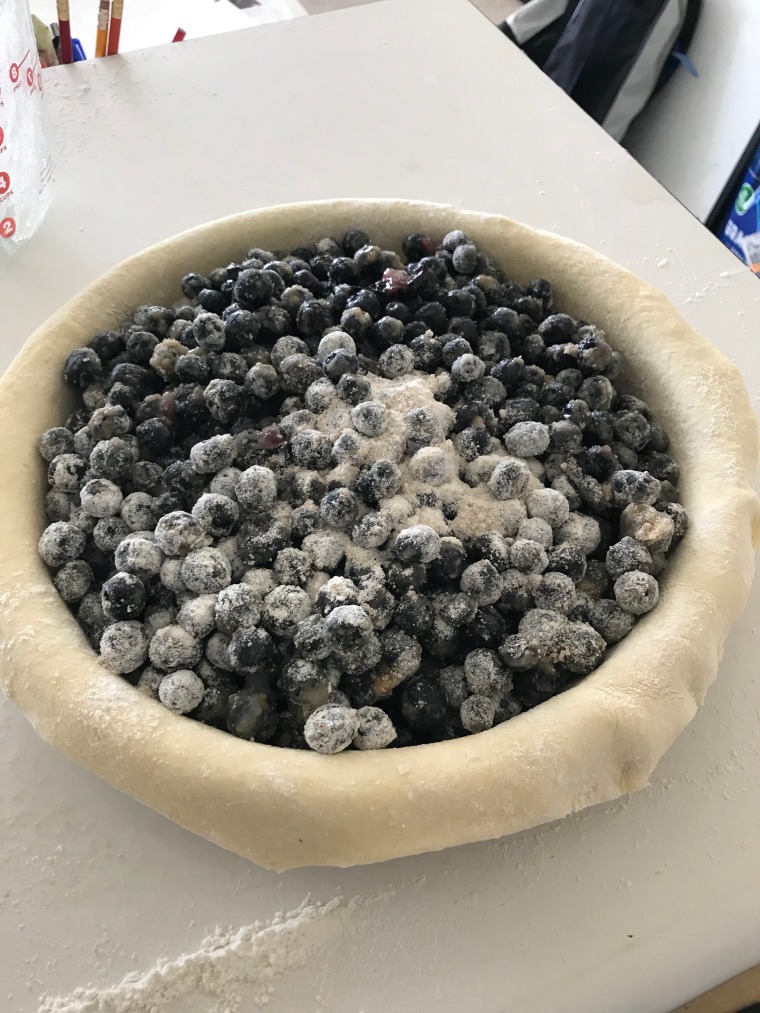 The filling in the crust. 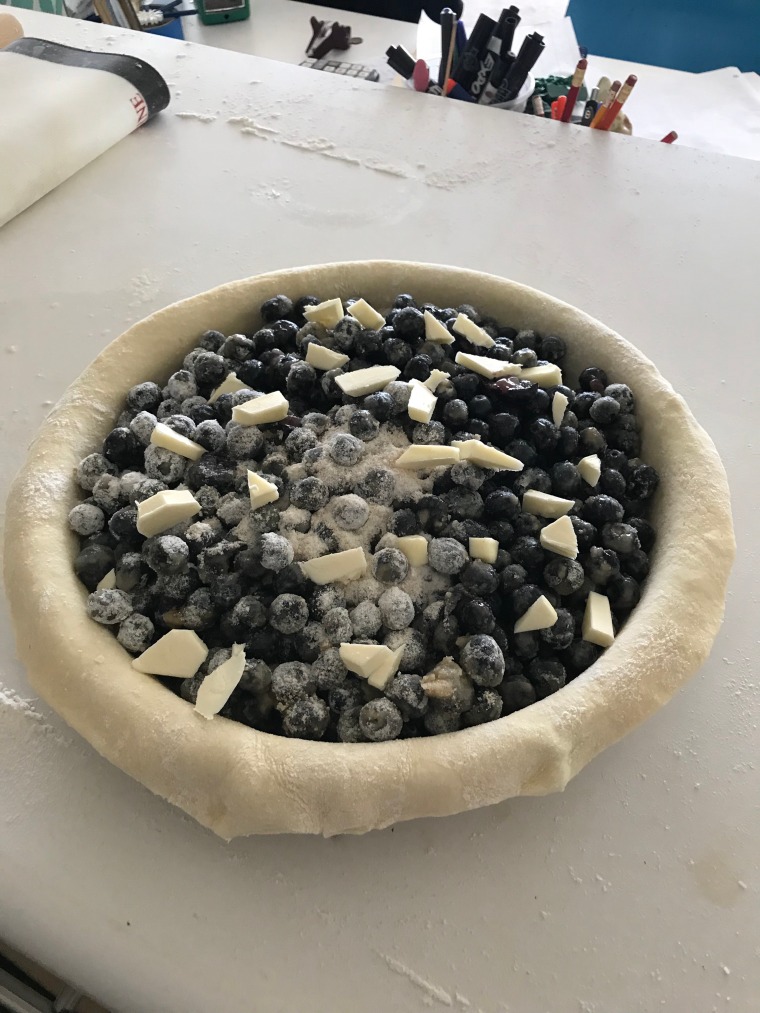 Dotted with some butter. 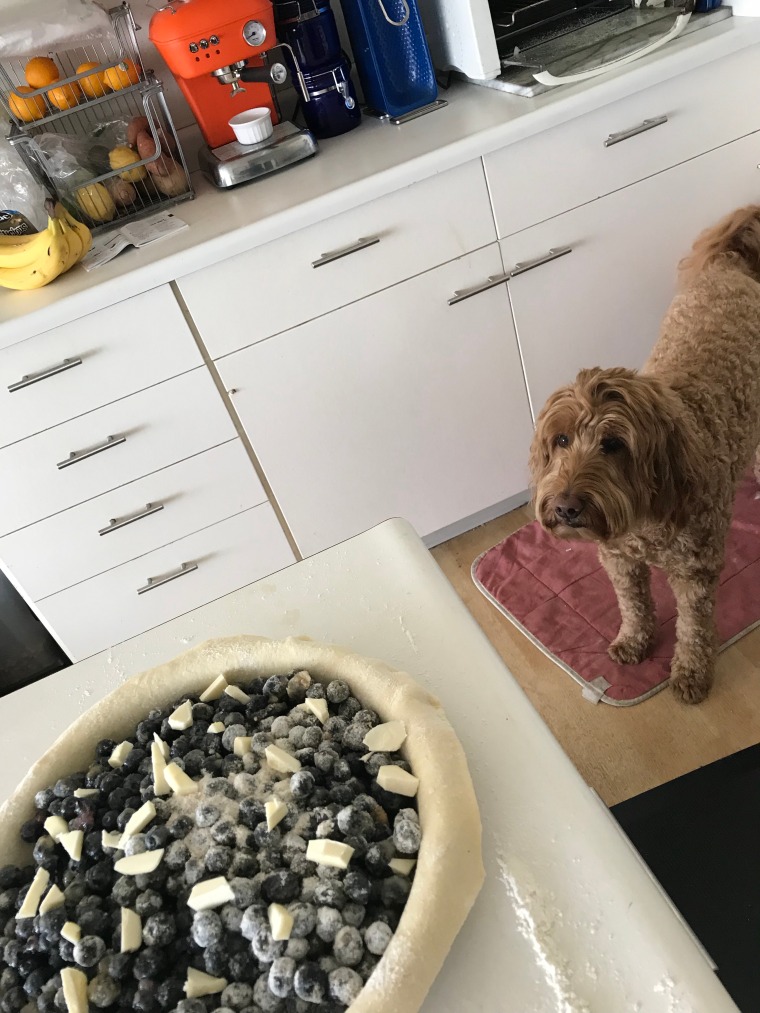 As always, my trusty kitchen assistant was ready to help! 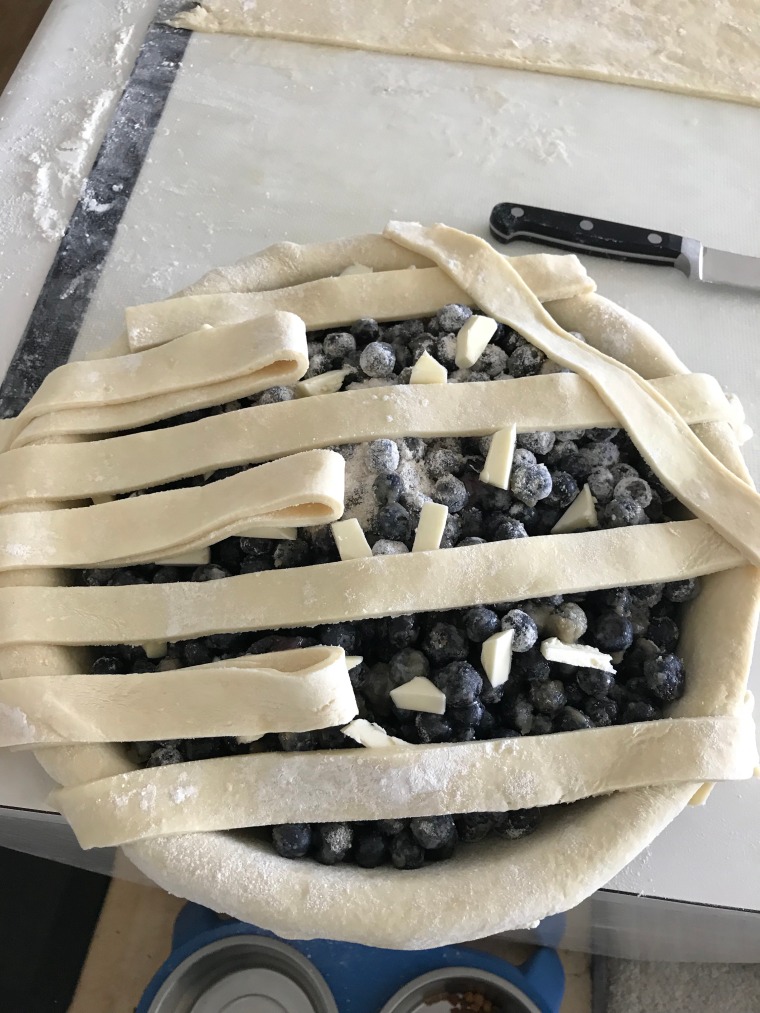 Making the lattice — I tried a diagonal crossing rather than 90 degrees. 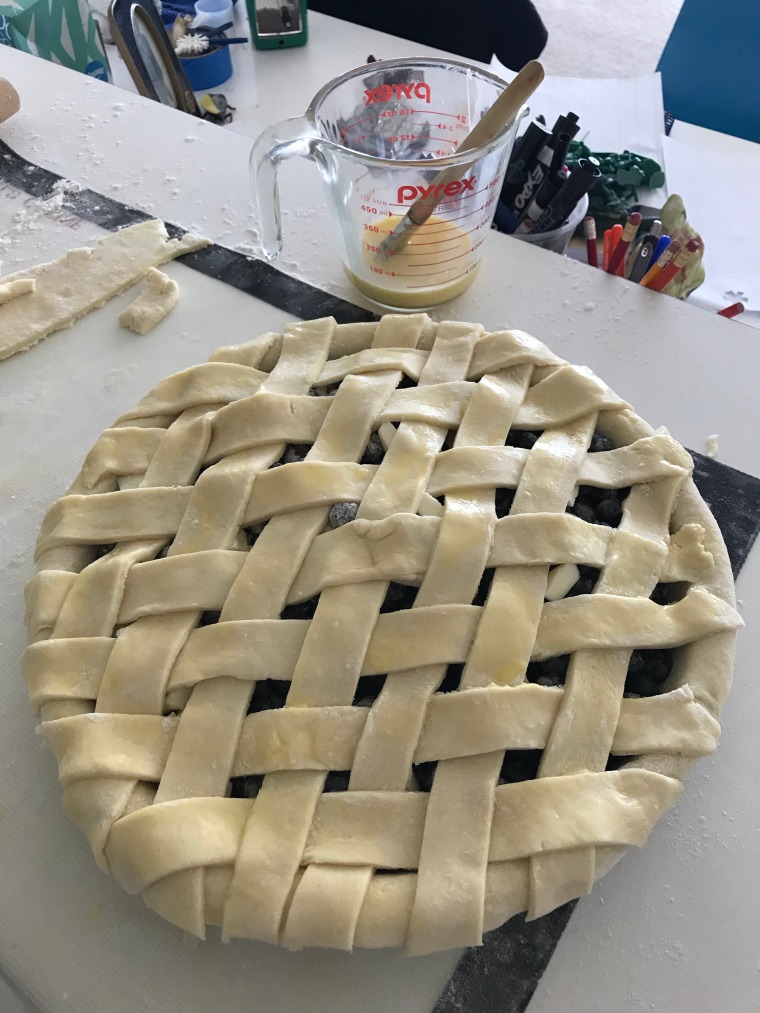 Instead of a crust wash of half milk and half cream, I used an egg wash for the first time. 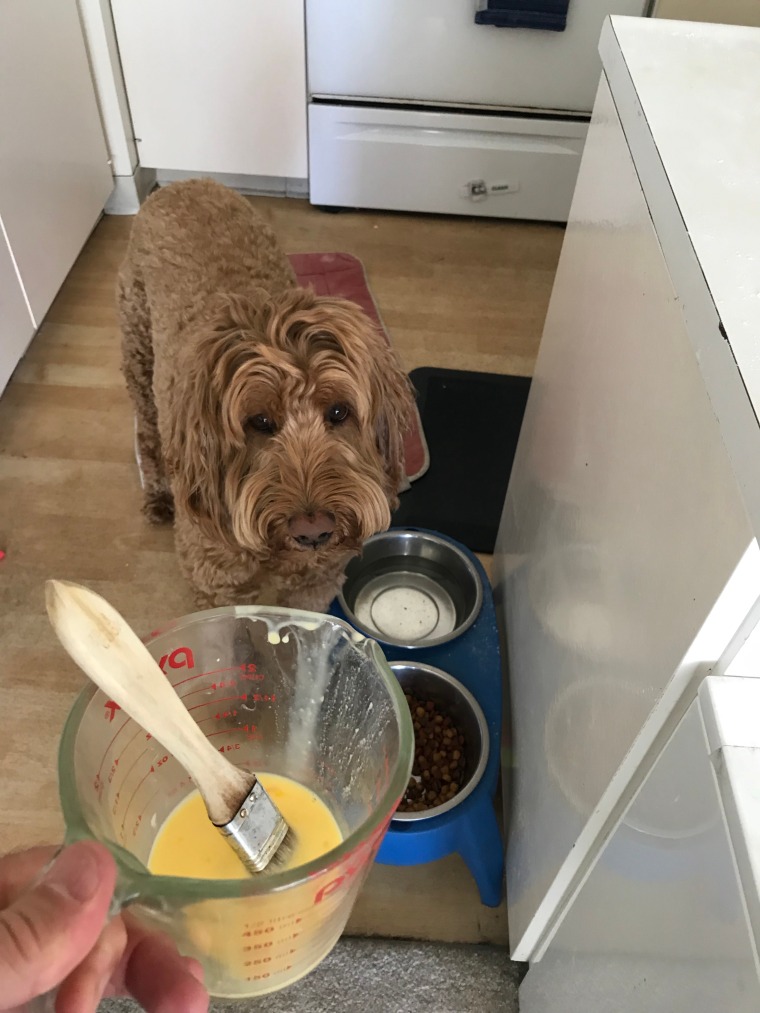 Not a drop of leftover egg wash went to waste! 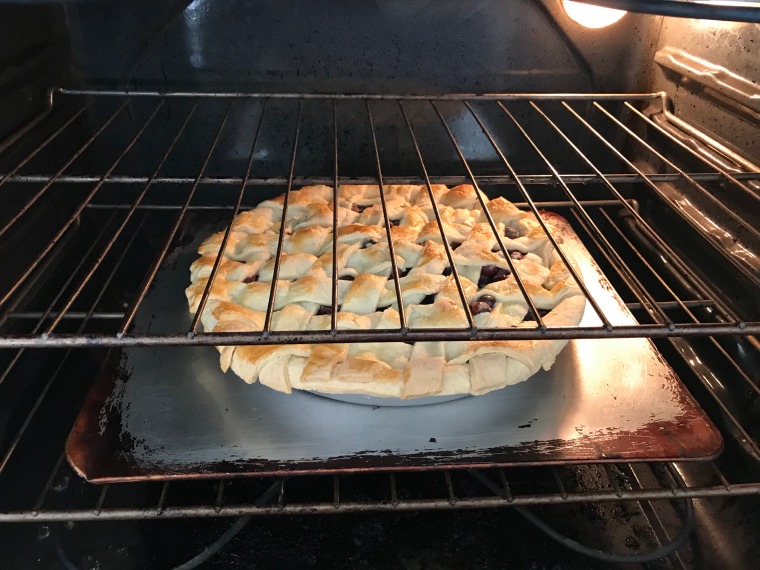 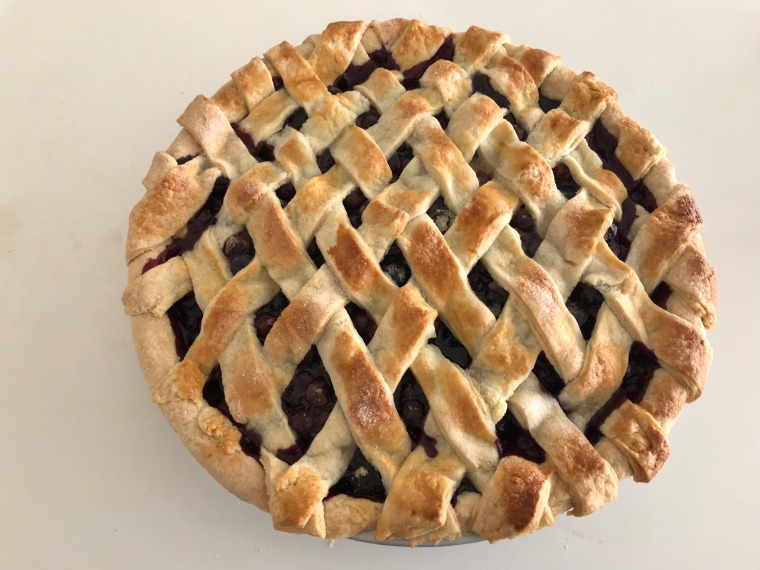 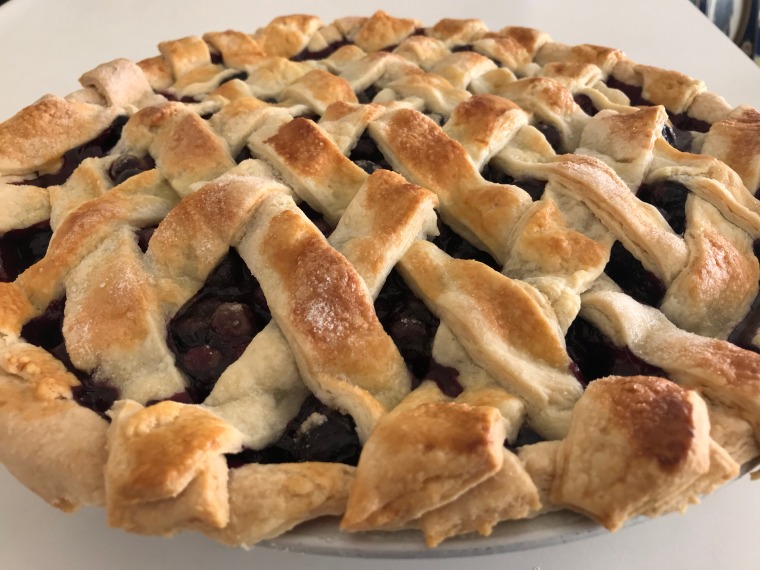